Carly Nelson and Sheena Winiarski are both recent graduates of O’More College of Design. Both of them showed collections in the recent Eloise Fashion Show and both women won awards for their designs. Carly won two awards,The Lookbook Award and The People’s Choice Award (chosen by audience members). 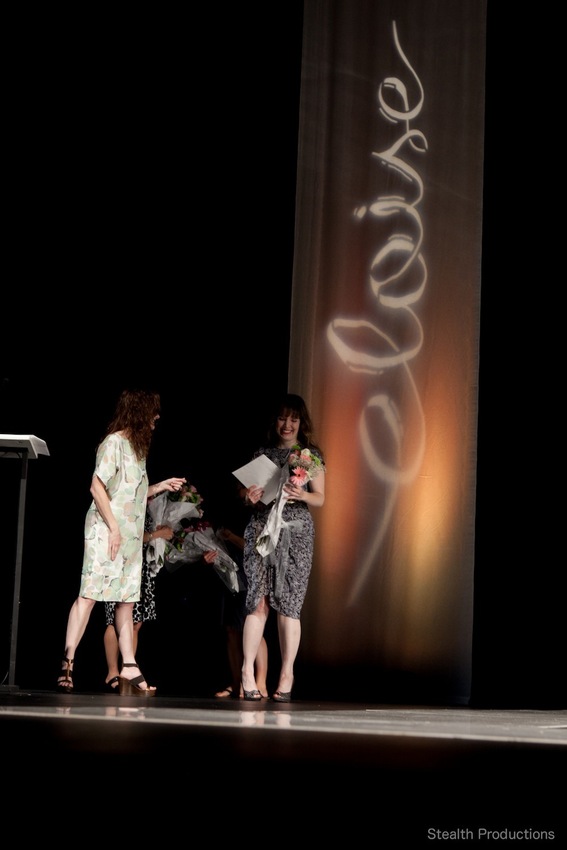 Sheena won The Distinguished Designer Award for her Design Collection and Business Plan. 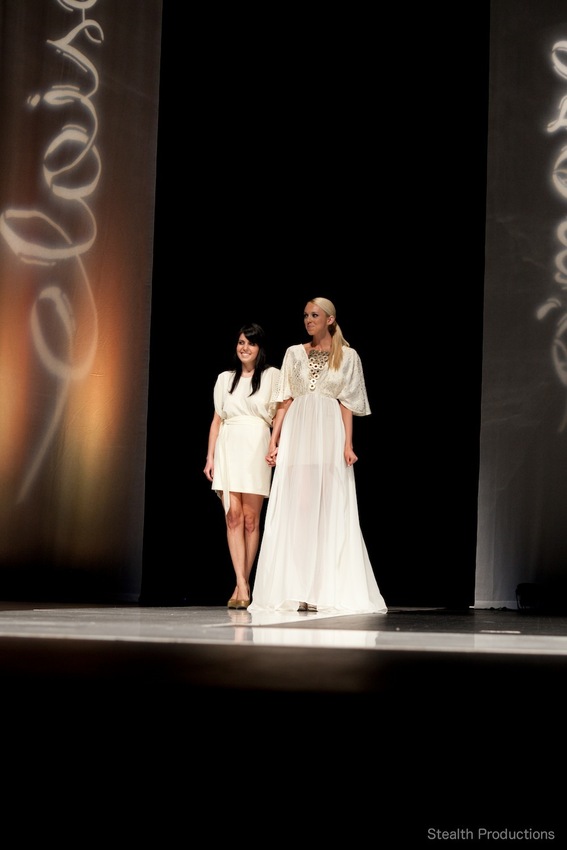 I was so impressed and inspired by their designs that I wanted to chat with them to find out more about what went into the creation of their collections.

Carly blew me away with her color infused collection“Suspiria”.  Each look in her collection was completely monochromatic from head to toe which created a dramatic visual impact on stage.

In addition to the color element, the details, fit, and overall style of her garments was really impressive for a design student. 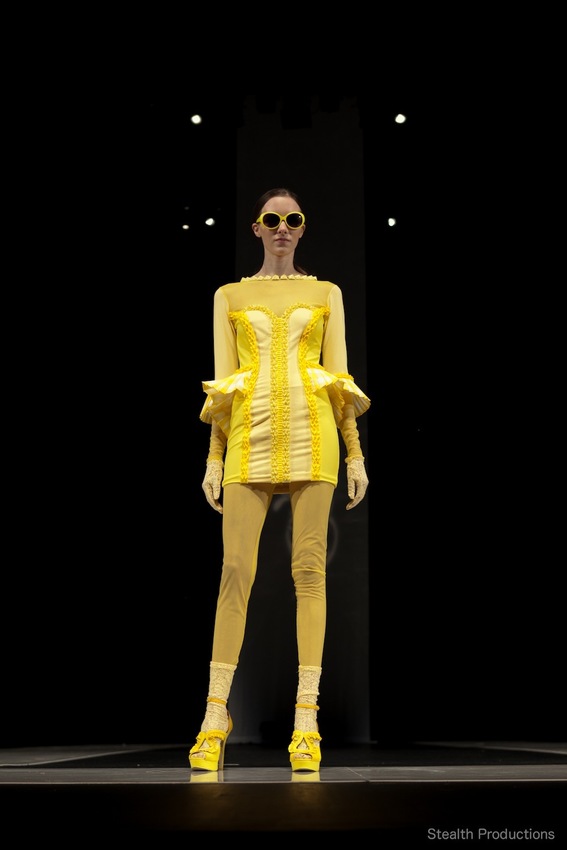 Carly is very mature, self-assured, and a bit shy. Perhaps the fact that she decided to attend design school at 28 instead of jumping right in after high school has something to do with that.   Although Carly has not always known she wanted to be a fashion designer, she has always been artistic and is a vintage clothing lover and collector.

I asked Carly about the process of designing a collection for the O’More Fashion Show.   According to Carly, the process starts with design sketches and design board, followed by presentations and finally, the actual creation of the garments. Each student is responsible for funding their own project and Carly estimates that the average cost is between $300 and $800.

Carly’s collection was inspired by the 1977 Italian horror cult classic, Suspiria as well as American Psycho. She pointed out specific details which are nods to each film. For example, the dramatic long red coat was inspired by a scene in Suspiria where one of the characters falls through glass. The triangular shape of this scene is what Carly loosely replicated in her design. 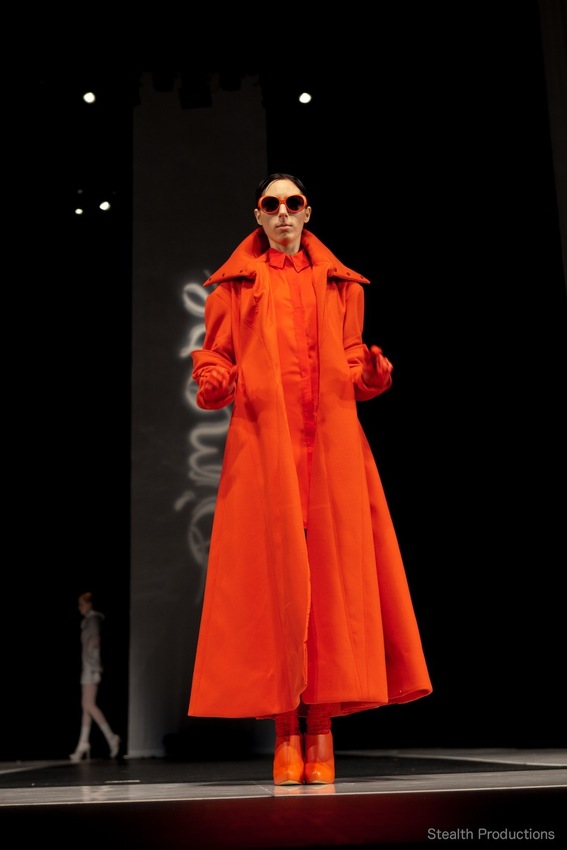 Another movie scene inspired ensemble was her pale blue skirt outfit with plastic jacket.  She took her inspiration from a scene in American Psycho where the very polished, well dressed character used a shower curtain to protect his precious suit while committing acts of violence. 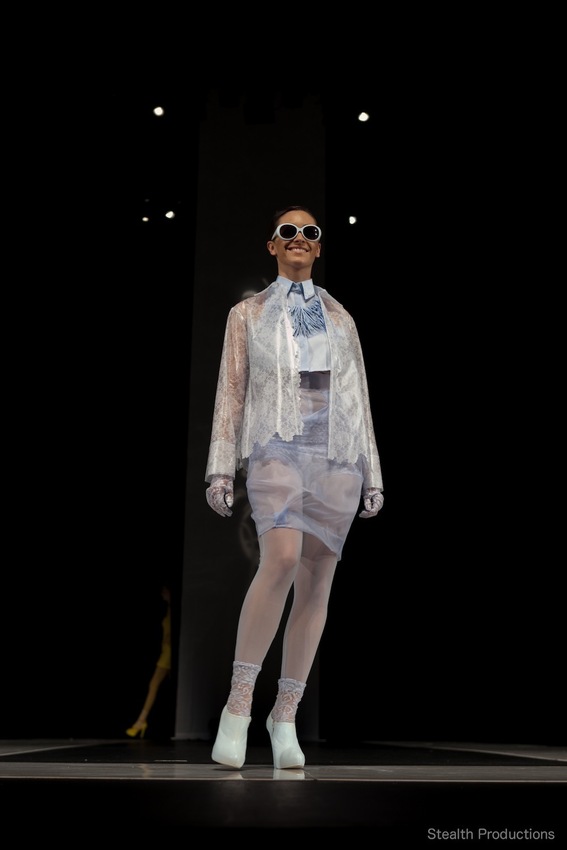 This notion that appearances create facades to cover what lies beneath is one that Carly expresses through her designs.  Another example of this is evident in both the grey and peach dresses in her collection.

Both are pretty and feminine with a sinister secret.  They have miniature knives and axes embedded in the fabric! Carly made the tiny axes and knives out of clay and they are hidden by the fabric so that only their outline is visible.  These macabre details are only noticeable upon close inspection, much like our own personality flaws.  These details and psychological film references add to the depth and intelligence of Carly’s work.

I will be interested to see what Carly does next. Now that she has graduated from O’More, she is looking toward the future with optimistic realism. She realizes that she has a lot to learn and would like to find an opportunity across the pond. I have no doubt that whatever Carly does, she will be a huge success!


Sheena Winiarski
Sheena is a very articulate, confident, professional young lady. She was wearing one of her designs when we met and it looked fabulous! The skirt pictured below with a black top and super cool strappy black heels gave the outfit a more edgy look. 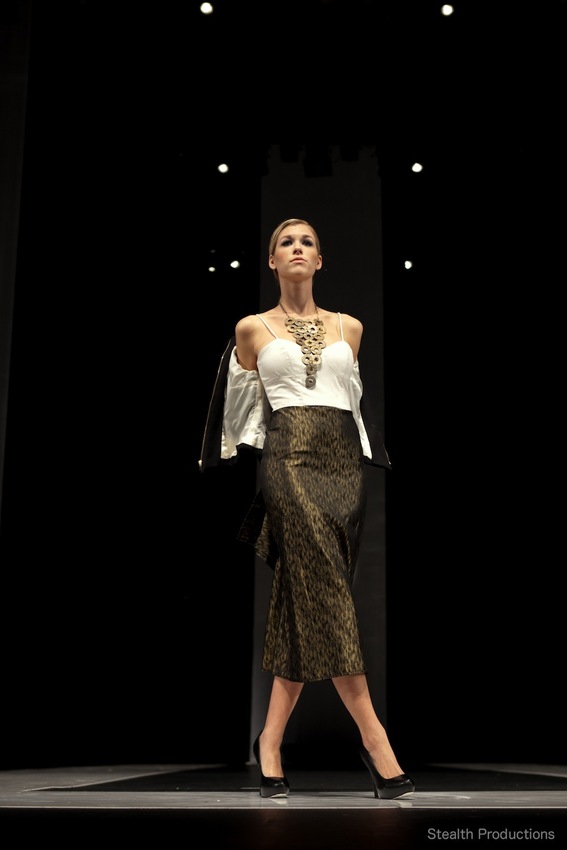 Sheena is very friendly and easy to talk to.  So, it’s not surprising that she was a Nanny before she decided to pursue Fashion Design.  Sheena is very self-motivated but gives a great deal of credit  to her professor, Kevin Crouch for her success at O’More.  She understands how fortunate she was to work with someone who nurtured her talent while also giving her room to grow as an artist.

Sheena transferred into O’More as a Junior and accellerated her program so that she could graduate early.   She worked hard to meet that goal and as a result, she had two collections in the Eloise Fashion Show.  She had a Men’s collection in the Juniors Category and a Women’s collection in the Senior Category.   That alone speaks volumes to Sheena’s work ethic and determination.

Her work as an Intern with Manuel proved helpful in designing the men’s line; especially when the men’s shirts.  Her men’s collection consisted of three looks. One was a rock-n-roll cowboy, with a funky, black leather fringe belt. 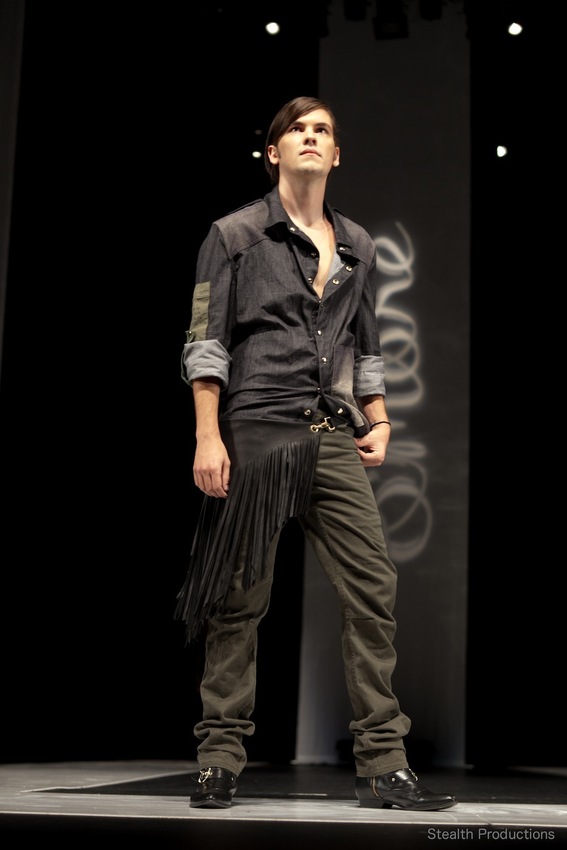 She brought the belt to our meeting so I was able to see it up close. The leather was so soft and the belt was very well made.  The great thing about it is that it is so versatile. I could see a woman wearing it just as easily as a man.  Sheena also informed me that she has been wearing it as a necklace which is also very cool.  Hmm…

The other two looks had a vintage military vibe. 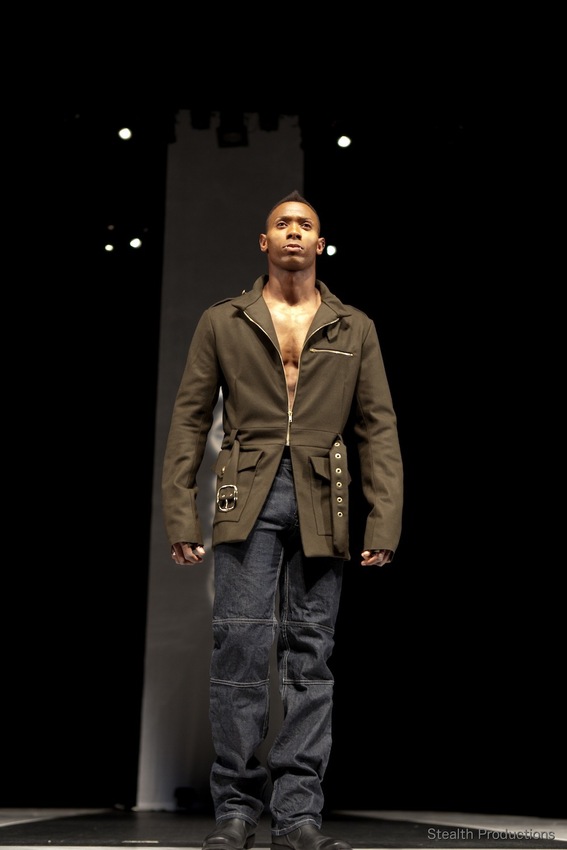 Her women’s line was softer and less tailored. She chose a very neutral palette of blacks and creams which gave her collection excellent visual contrast. 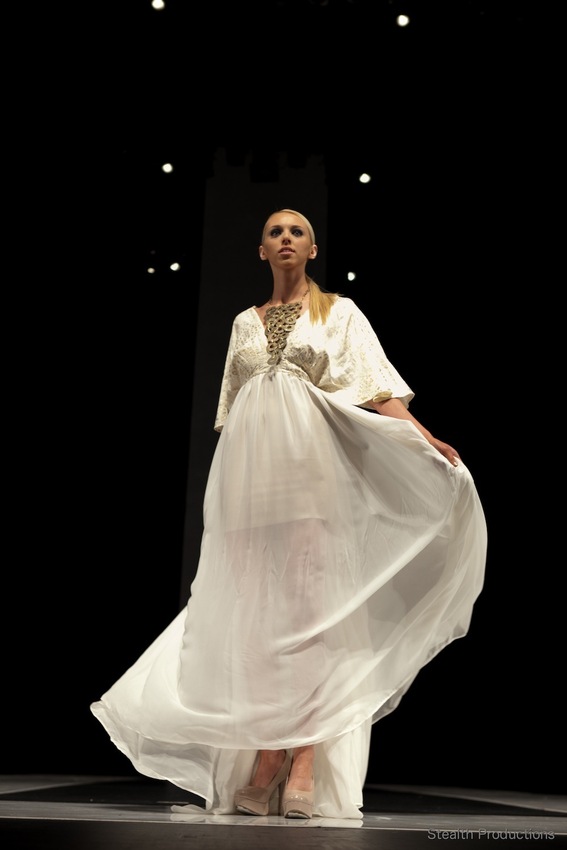 A short, black, lacy dress was sexy and very fitted.

The one tailored item in her women’s collection was a cream colored jacket with black stripes.  I loved the silhouette of the jacket and the ruffled collar and longer back. 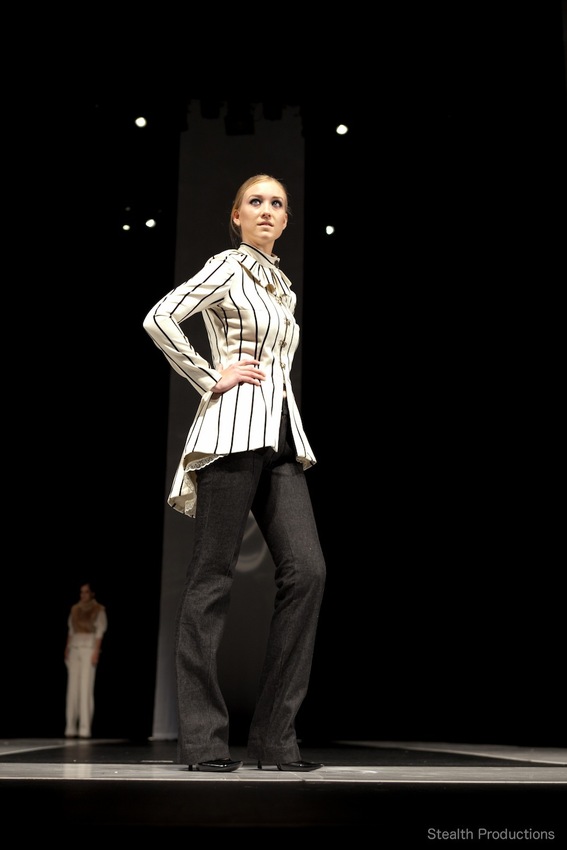 This jacket is even more stunning in person!  She lined the jacket with black lace which added a feminine touch.

Sheena indicated that she enjoyed working on the men’s collection best and that she would like to focus on menswear in the future.  She is open to opportunities that will allow her to learn and grow as a designer.  Wherever she lands, they will be lucky to have her!

Kudos to O’More and Kevin Crouch!  They are certainly doing something right!

**All photos from the O’More Fashion show are courtesy of Doug Barry of Stealth Productions.